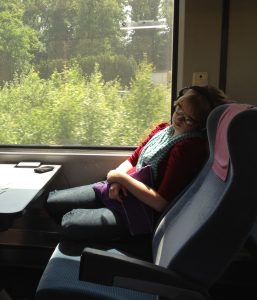 These were our travel days — left Hastings at 7:45 to pick up Mark in Lincoln and then went on to the Omaha airport. There were weather-related delays in Newark, so we couldn’t take off for quite a while and we thought we had absolutely no chance to get our connecting flight to Amsterdam. The kids were already beleaguering us about a day in New York if we couldn’t get out until the next night, and I was pretty stressed about it (but not compared to earlier trips). But when we got to Newark, they let us off the plane first and told us to catch a bus across the airport to the right terminal/gate, and we ran for it–only to find the gates already closed. The United guy was still there but didn’t think there was much of a chance of the plane getting opened back up, but apparently the captain saw Mark and the kids waiting and “looking jolly,” and insisted on letting us on board. We were scattered all over the airplane, so I couldn’t snuggle up to Mark, but otherwise, it was a good flight. I watched three movies, and Kai watched a couple too –thank heaven for the individual in-flight entertainment so it could be entirely different movies!

We got into Amsterdam with about an hour’s delay (chickenfeed by our standards) and were, of course, sure that there was no way our luggage could have made it onto the Amsterdam flight. But it did — Kati spotted our lime green suitcase right away, and all three pieces were there. That was really amazing. We had a light breakfast at the airport and waited for our 10:50 train to Osnabrueck. The train ride was very pleasant, the train almost empty and the kids kept dozing off, which kept things nice and quiet.

We got to the OS train station at about 2 pm and Hermann picked up our luggage with the Kia, but we took the bus. We had a lovely late lunch and then went for a walk to the Botanischen Garten with Imke. The weather was fabulous — warm and sunny and apparently the most summery it has been all year. We were truly tired by the end of the day, though, and Mark and I fell asleep in Imke’s garden chair holding hands. 🙂

We did rouse ourselves for Abendbrot with everyone, but we were in bed by 8 pm. We’re sleeping in Frau Kuhlmann’s guest room (formerly Kai’s room) and so we’re a bit away from everyone, which is wonderful and very relaxing.