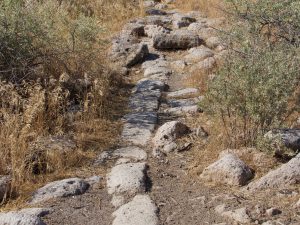 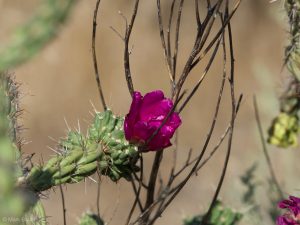 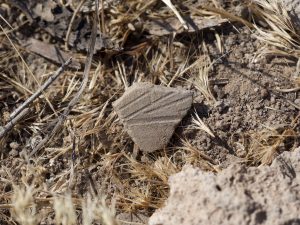 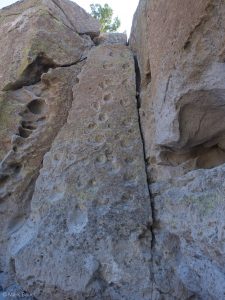 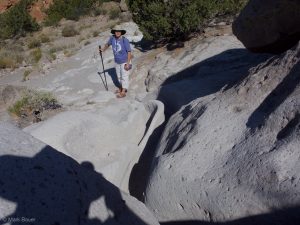 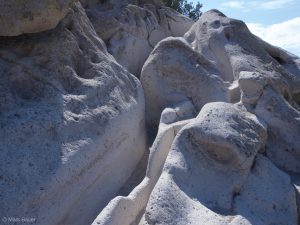 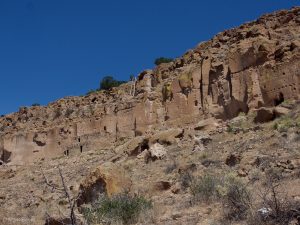 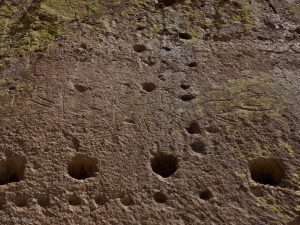 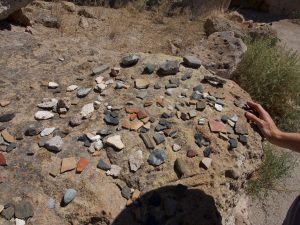 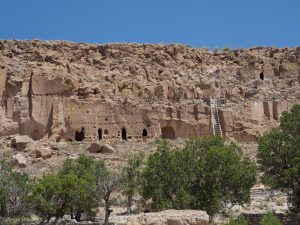 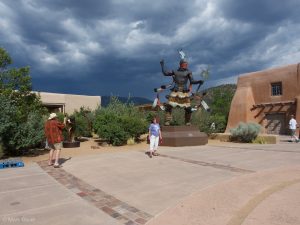 This morning, we backtracked from Santa Fe to the very small area of Bandolier National Monument that we had not visited, Tsankawi, a largely unexcavated mesa top village with some cavates (those little cliff dwellings that have no masonry but are only carved into the soft tuff cliffs).  We took the 1.5 mile hike with a couple of detours, and had a really good time.  Since there is no reconstruction at the site (its  collapsed walls are barely visible until you start looking for them) visitors are just asked not to take or disturb anything (out of respect for the ancient Pueblans who lived there) and stick to the paths (because in the soft tuff, everybody leaves a significant trace, so that the paths in the tuff are at times knee- or even thigh-deep from sheer erosion).  But leaving everything undisturbed is clearly hard for people, because everywhere we looked, there were pottery shards, and many visitors pick them up and then leave them in piles or on rocks.  We didn’t do that, of course, but we did look at the already-assembled “artifact altars” and were in awe of some of the patterns that we could see on the little shards. And then of course we saw the shards everywhere we looked! Fascinating.
After our hike to the ruins and back (onto the mesa top of the small canyon where Tsankawi is situated), we drove 20 minutes north to another cliff ruin, this one on the reservation of the Santa Clara Pueblo.  It’s called Puye Cliffs and was a really impressively long stretch of cliff dwellings, with many petroglyphs and some adobe “plaster” on the inner walls still visible, but with a lot of erosion and collapsed walls all over.  We were able to do a self-guided tour of the area, which was impressive, even though it didn’t even include the ruins on the mesa top (where apparently parts of the movie “Missing” were filmed).
We returned to Santa Fe around 12:45, to meet with Laurie and Randy, since they were now done with their conference, and we were going to do something together.  We decided (since Laurie has recently had surgery on her heel and cannot walk for miles and miles) to go to “Museum Hill,” where Santa Fe’s big museums are, in the ritzy part of town where the really classy adobe villas are also located.  We started our museum afternoon with a lunch at the museum cafe, which has a lovely outdoor seating area, and had equally lovely food and a very nice waiter.  Then we decided to go to the Museum of Native American Art and Culture–mostly because Mark and I were hoping we could get a bit of a better insight into the connection between the ancient art and architecture we have been seeing and the contemporary Native American art and culture of this region. We were not disappointed–there was a very new display that explained some of the connections very well, often putting a traditional and a modern version of something (pottery, beads, clothing, living space) in juxtaposition to each other.  And there was also a display that showcased the different pottery traditions of the different Pueblo tribes that are all located here, in Northern New Mexico.  (We finally got straightened out about the confusing references to either 19 or 21 pueblos–19 are right here in Northern New Mexico; one is actually in Mexico, and the 21st are the Hopi in Arizona.). And two exhibits addressed much more directly the critical and often satirical attitude of contemporary Native American artists to the weird mix of appropriation and hostility that characterizes white America’s attitude to Ntive Americans.  One exhibit featured a whole bunch of different artists, and the other a famous artist named Frank Buffalo Hyde, who paints these oil paintings that make fun of things like selfies and the way people record, but do not really see, their surroundings–in pretty incisive ways.  We stayed in the museum until about 4:30, and then went home through the ritzy neighborhood and through the new hip nightlife district, the rail yard, before coming home.
Then we sat around and chatted, and eventually had a salad-and-bread dinner together. I did a bit of pre-packing, since we want to leave early tomorrow morning, and Mark and I went for one last walk to the plaza and back around 8 pm, when it had cooled down nicely after a very hot day.  And now we’re done with out last Santa Fe day!