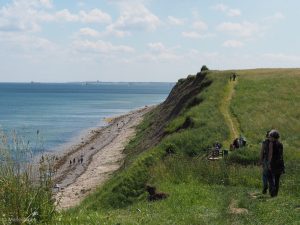 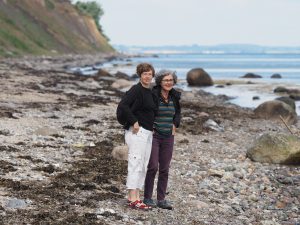 Mother & daughter in love with the ocean 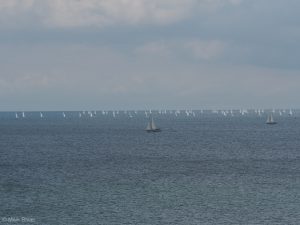 Sailboats on the Baltic near Kiel 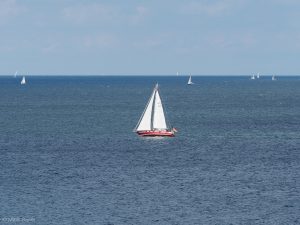 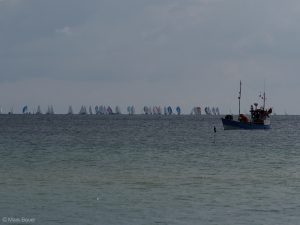 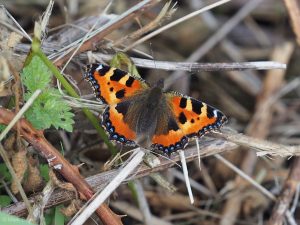 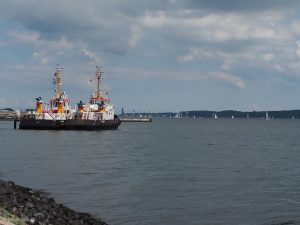 Boats in the Kiel Firth (from the east side) 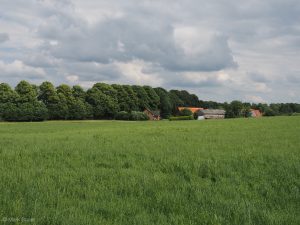 Judith’s house (leftmost) and an “outside” view of the Lindenallee

We woke up at 7:30 to much better weather–cool but stable weather with mostly sunshine. Judith texted us just after we had gotten dressed that coffee and tea were ready, so we all had an early start, and decided after breakfast to go back to the coast, because both my mom and I always run an ocean deficit.  Kai and Michael both stayed behind, and Judith drove us to a fabulous beach area called Dänisch Nienhof. Less than an hour from where she lived. We found a parking spot and walked down to a
a stretch of beach with lots of pebbles and rocks from which you can see the Kiel Firth to the east.  That was fun because we stayed on the other “bank” of it two years ago, and didn’t get to explore the western side, and also because with as much sun and wind as there were, there were many hundreds of sailboats in that direction–the famous Kiel Week with its regattas just ended today and we speculated that there were many extra sail boats around.  We walked further west along the beach, just enjoying yang the sunny day, and then walked back on top of the sandy cliffs, for a wonderful two-hour walk with plenty of photo ops. We then drove to Holtenau, a part of Kiel where Judith used to work, and where some of the locks that connect the firth to the Kiel canal are located. The quayside had several larger two-and three-master sailing ships (mostly for tours), a cute little lighthouse from 1895, and several outdoor cafes with view of the Firth. We had coffee and cake for lunch in one of them, and really had a wonderful time sitting and walking around in the sunshine.  We left at about 1:30 and then hung out at Judith’s for a bit longer. We talked over coffee, and Mark and I went for a short walk to explore an oak tree we could see from Judith’s that lost a major limb last night. Judith took us to a döner shop nearby for an early dinner around five (our first döner, basically a gyro, since we came, even though this is the fast food that has replaced wurst and hamburgers in Germany as a fast food–it was good but way too much food). She then drove us to Neumünster so we could catch our train back to Osnabrück, and thanks to the Eurocup soccer game (Germany-Slovakia), we had a fairly quiet train ride home to my mom’s, took a taxi home, and went to bed after putting a first load of laundry in the washer. Tomorrow is laundry, packing, and logistics day!