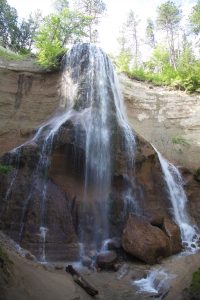 This morning, we took off after a slightly later breakfast (we switched back to Central Time, so “sleeping in” was actually an illusion) and checked in with the canoeing and tubing outfit where we had booked our canoe tour; then, we drove to Smith Falls State Park, which boasts Nebraska’s tallest waterfall (at 63 feet/19 meters), and checked out the falls, which are (if not very tall compared to others we’ve seen) very picturesque. They don’t “fall” right into the Niobrara, but actually are part of a little tributary, of which they are about 200 on the south side of the Niobrara–where the harder formation underneath the “sand” that makes up the sandhill will resist the usual erosion that shapes this area of Nebraska. We then backtracked a few miles from Smith Falls to get back to the place where we were instructed to park our car, while a van with a canoe attachment took us to the launching spot right inside the Fort Niobrara Wilderness Area. We got our canoe, and some paddles and life vests (which the outfitter stressed we would probably NOT need, a surprising remark at first), and we were off. We figured out pretty soon why the life vests were optional — I don’t think we came across more than three spots where our paddles didn’t hit bottom within 3 feet, and most of the river is wadeable without getting one’s swimsuit wet. We actually got stuck on a couple of rocks and sandbanks that we didn’t spot fast enough. It’s not very fast moving, so that this does not cause any whitewater at all, and so rafting is not very exciting, at least in this portion of the river. It is, however, beautifully quiet (or quietly beautiful?), and the natural course of the river goes past some impressive white and red sandstone cliffs and lots of mature trees. We really lucked out in terms of the temperatures–they had dropped down from yesterday’s high of 106 to the mid-80s, and I think it didn’t get worse than 90 even in the early afternoon. Unfortunately, we didn’t see any animals except for some birds, but since the trip didn’t start until 11 am, that’s not very suprprising. We canoed for about 2 hours total, alternately paddling and floating, and even had our picnic right on the river; we only got out once, to check out another little sideways waterfall. Then, at about 1:30, we reached Brewer Bridge, where our car was parked, and started the long but uneventful drive to Hastings through the Sandhills. We got there at about 6 pm, picked up pizza for everyone, and had dinner with Kati, Krynn, Alyssa, and Tom, our housesitting crew. I repacked a little so I would have everything I needed for my Santa Cruz trip next week, and we picked up the mail both at home and at the office. Then, with Mark’s last little bit of driving energy, we got ourselves home to Lincoln. We got home just before 10 am, and although the last three days have been a LOT of driving (over 300 each day, I believe), we were sure glad to have pushed a little and be home now. 18 days was a good length, and I think we were both ready to stop living out of a suitcase and a cooler by now!