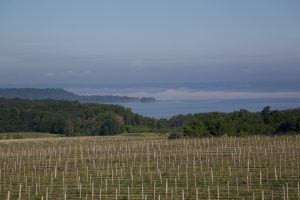 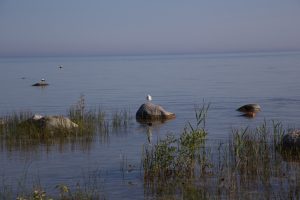 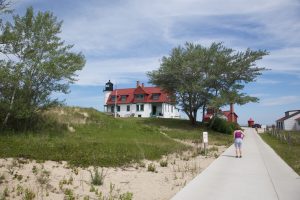 Today was another half and half mix of exploring and driving. We slept a little longer than we have been (until after 7!) and then drove up and back down the Old Mission Peninsula, which is a long, narrow land strip that juts out over 17 miles directly from the center of Traverse City–very picturesque orchards and vi yards on rolling hills, with the bay on both sides and a lighthouse at the end—a very pleasant drive, parts of which were directly along the waterfront. It was all very picture book and perfect for driving along. Then we left Traverse City behind and went back to the western coast to Empire, where the national park starts. This time, we went south, and took one more short hike to another dune, Empire Bluffs, from which we could see the dunes we stood on yesterday really clearly. These dunes had more vegetation, but they were again several hundred feet up from the water. Our last stop in the park was the mouth of the River Platte (no relation to our Platte), where we walked along the beach that formed the banks of the very shallow river and then the lake. The water was very clear and we realized that we could see fossils in the rocks really distinctly. We waded around and found a couple of stones that looked really interesting, and that we later found out are called Petoskey stones–they have the fossils of corals embedded in them and look very distinctive, and it turns out they are actually the state rock for Michigan. Fun times.

We then left the National Park area and, with one more stop at a lighthouse with a last view of the bay to the north, went on to a small port town called Frankfort and had a great lunch–a lamb burger and a steak sandwich on nice fresh bread with coleslaw at the side–and then drove inland for our 2.5 hour drive to Kalamazoo, where friends of ours, Eric and Ryan, live. Ryan teaches at Kalamazoo College, where the daughter of another friend from Hastings just graduated (she was still in town as we drove in, but we missed her–we will catch up with her in Hastings, where she was headed!). Eric and Ryan fed us a marvelous Thai chicken curry, and drove us around town to show us Kalamazoo and the college (Ryan’s office is in an awesome older building; the campus is beautiful as you might expect–the college has 1,400 students, and is the oldest liberal-arts school in the area, founded in 1833 and–thank you, Wikipedia–among the 100 oldest colleges in the U.S.). It’s also right across from the huge Western Michigan campus with its 24,000 students. Kalamazoo as a town is surprisingly big, for only 75,000 people–the metropolitan area adds enough (another 200,000 or so) that it’s downtown area has sort of Lincoln size and feel. After our little driving tour, which also included the beautiful neighborhood right by the college where Ryan and Eric live, we just sat and talked for a while about jobs and road trips and Michigan… We had brought champagne to celebrate the Supreme Court decision in favor of marriage equality (a decision that means that Ryan and Eric, who got married in 2006 in California, but whose marriage has not been legal in Michigan, where they moved in 2012 for Ryan’s job, until today!). But we just left it for them because we got too tired to toast the great news (how’s that for middle-aged?), and went to bed around 10 instead.