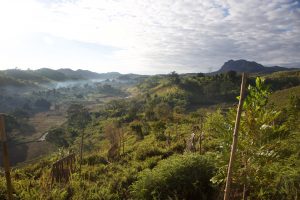 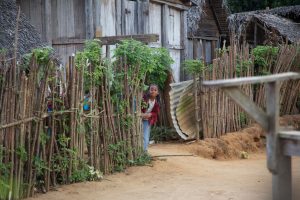 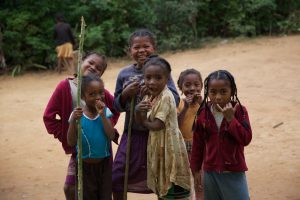 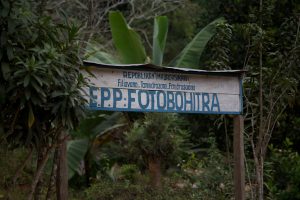 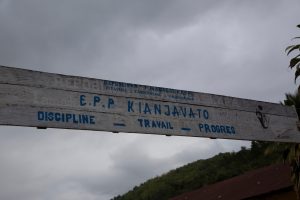 Had to get up in the night.  The stars in the sky are brighter than I have ever seen them.  The Milky Way is not just visible but dramatically so.  You can see the structure of it all.  Slept just ok, up at 5:30 for a 6:00 breakfast.  We waited until all the lemur research teams had headed out before having a meeting to plan how everything was going to be done.  Started off by organizing the tools cases, they were packed for shipping, not for use. I went tot the top of the hill to get a signal so I could get a few emails and text messages sent. Tested all 4 solar panels (open circuit) for voltage, each tested from 20.3 to 20.6 flat on the ground with overcast skies.  The back of the panels were painted black to help with heat dissipation.  The aluminum rails were cut and two people were busy cutting the 16 L brackets.  Lunch was rice and something, tasted fine.  It had carrots and onions along with zebu (beef).  We then had a couple of hours to kill.  I played frisbee with a couple of the guys while the other students kicked a soccer ball back and forth.  About 2:00 we headed over to inspect one of the schools we are installing.  It looks like it will be ok.  There were several dozen youngsters playing with the Erik, all giggling and laughing.  I photographed both the building and the playing kids.  The second school we visited was taller, but I think won’t be a problem.  From there we went to the school that EWB installed lights in 14 months ago.  They still worked well, but one light bulb looked like it was near the end of its life.  This was the first day I got to actually meet the people of Kianjavato.  They seemed happy to meet with us.  We then dropped off care packages to a couple of peace core people.  One, (Ann) was from Hawaii and had been here for a year but still had another year to go.  Back to the camp and had my first real experience with a squat toilet.  Dinner was rice, potatoes, and some meat all mixed together.  It was beef again but they tend to leave lots of bone and bone fragments in it so you need to be careful.  It is dark here by 6:00.  The drivers and some of the other help broke out a guitar and sang while we ate.  Had yet another banana for dessert, but they are good ones.  The very small ones are very sweet.  Some of the group broke out a deck of cards while a few others just talked about some of the issues with endangered lemurs ending up on dinner tables.  I headed for my first shower.  Not bad, they had a place setup for it, but you basically filled a bucked of water from the well and used a cup to pore it on your self.  Felt much better after that.  I continued on the journal while everything was sorta wrapping up for the night but every body was in bed by 8:30.  I am writing this from inside my tent.  Internet access sucked today and I only got a signal at the top of the hill.  With it drizzling, it didn’t seem safe.  I do miss my daily talks with Antje.