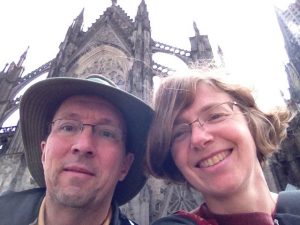 Mark, Kai and I took a fairly early train to Cologne and took the classic sightseeing tour we’ve taken many times before, so we could show Mark the highlights: we went to the cathedral (although we only spend a few minutes inside it) and on to the end of the downtown pedestrian mall, where the lego shop is.

We found a cafe there so that we could sit and eat, while Kai kept shuttling back and forth to the lego shop to decide what to buy–he ended up buying a Lego Mindcraft kit that’s really meant as a joke for grown-ups, but he was happy with that. We then went down to the Rhine and back up to the cathedral, and spent about an hour in the Roman-Germanic museum.

Then it was time to go on to Aachen, where we were picked up by Ralph and then had a lovely Danish cake with our coffee and tea.

The girls had dinner / night-out plans and were gone by 6:30 for Sushi and a night on the town (sort of), with directions to catch the bus back home before midnight. Ralph and Mark and I went for a lovely walk out of town and back around through Brand (their neighborhood), and then Ingrid made us a wonderful meal with Nuernberger Rostbratwuerstchen and Spaetzle, and we sat and talked until about 11 (it was great to catch up with them after 2 years; Nora is about to go to Argentina for 2 months, so that’s a great adventure), but that’s as long as I could make it last. We were pretty tired (had been up since 6:30 am) so we fell asleep right away.