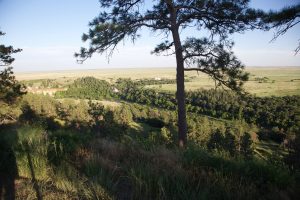 We left Hot Springs this morning shortly before 8, and drove the 2+ hours to Agate Fossil Beds, a bit Southwest of Chadron, to continue on our geology and paleontology kick and see the fossils (mammals, from about 19 million years ago) there–we had no idea that the 29, the road we were on is sometimes called “Fossil Highway” because there are so many fossil-related stops on it! It was a nice visit all in all, and since it was only about 10:30, it was bearable, in terms of temperatures, to take the little 1 mile walk out to spots where you can see the so-called Devil’s Corkscrews (Daemonelix), which are really just prehistoric roden burrows that have a fascinating spiral shape. However, all in all there wasn’t much to see at this particular National Monument, because most of the fossils were taken to other sites. That made it all the more fun to stop also at the teeny “Trailside” museum at Fort Robinson, where some of the fossil finds of the general area, including some fossils from the Agate site were displayed–most dramatically, two mammoths who died locking their tusks in fight, and who are pretty well preserved. We didn’t look at anything else at Fort Robinson, but did learn enough to make it all connect back to a) the Little Big Horn battlefield and various other historical markers along the way about the war with the Sioux in the 1870s, and b) to the interesting “Indian connection” at the Agate site, which used to be a farm owned by a man named Cook who was actually very friendly with the Indians and got many artefacts from them, while also serving as a liaison / ambassador for them when the Laramie Treaty was broken and when the Cheyenne in the Fort Robinson area were mistreated by the troops just before the final surrender of the Black Hills. It’s such a sad story, but it was good to read about Cook, who also brought in the first paleontologists, so that his son also became one and was part of various teams that excavated at the Agate sites.

We also had yet one more picnic lunch at the Trailside museum (now we’re really down to raisins, almonds, and a few tortillas for wraps), and then we drove the long, quiet route through the Sandhills from Crawford through Chadron and on to Valentine. It is beautiful rolling countryside, with the occasional sediment butte or cliff sticking out, but I have to say that I wasn’t as impressed as I was the last time I drove through the lower (more southern) Sandhills–and I am not sure whether it was because that route is prettier or because the Rockies, Yellowstone, and all the dramatic sights we’ve seen were so much more sensational. We are probably also getting a little burned out on driving–at any rate, we were glad to arrive at the Valentine Super 8 a little after 4 central time. We unpacked, had an early dinner at a perfectly nice restaurant called the Peppermill, and stopped to pick up some sandwiches and some towels for our trip tomorrow. We also thought that the beastly temperatures (106 was the high today!!!!) warranted some Goodrich ice cream! We cooled off in our hotel until it was a balmy 102 and then decided to explore the Niobrara a little in search of a swimming hole. But the road to the Wilderness refuge nearby is being redone, and so the access that we were told would exist wasn’t readily apparent–and it was still very hot and sticky. So we drove back and tested the hotel pool instead, and called it a night soon after that.