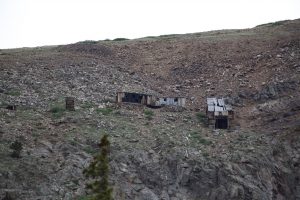 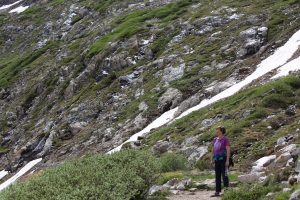 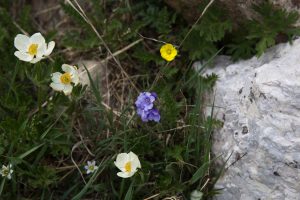 After a peaceful night in Stan and Kathy’s guestroom and a leisurely breakfast, we took off for a little shopping jaunt–we were hoping to get a sleeping bag at REI, but they were ridiculously overpriced, so we gave up on that for now. Instead, I dragged Mark to IKEA, which was right next door, and he got his very first tour of the store. I have to say we did this in fast-forward, since we have no intention of buying a kitchen or office furniture at this time–but we walked out with two tiny lamps we liked, plus some Swedish chocolate. Then, we left Denver and its hateful 96 degrees behind and, in the course of two hours, got ourselves to 10,000 feet and the low 70s at Stan and Kathy’s mountain house (known as the cabin, but really a small house) in Fairplay. I had never been in this region of Colorado, even though I know the area an hour or two north so well, and I was really surprised that there is a huge plains area tucked between the mountains of the foothills and the higher elevations here. It is called South Park (the South Platte runs through it) and is apparently sitting atop the sediment left over from the previous mountain range that was here before the Rockies. On the way up, we saw major traffic jams going down (after Fourth of July weekend), so we were glad we were going the opposite way. We arrived around 1:30 at the Cabin, with Stan and Kathy having gone ahead, and we had sandwiches and soup in their kitchen, plus Swedish chocolate. Then we got into their four-wheel drive car and drove up to a teeny mountain lake called Kite lake, where a trailhead leads to three 14,000 footers. Stan, Mark and I went up the trail a little ways, to an area where a bunch of collapsed mining buildings were sitting. There are tons of old, abandoned mines and gloryholes here, but also still active crystal and gold mining, which is really destroying the area, given the way how this is done now. The landscape was glorious, and even though the hike was very short (but steep) it was really wonderful. The wildflowers are in full bloom, and Kathy, who has a broken leg and couldn’t hike, got a nice photo of a bird that’s rare for this area. We headed back around 5:30 pm and Stan made us great pasta and salad for dinner; we sat around and talked in the living room, with Mark showing his Madagascar and other travel photos. What a nice day!