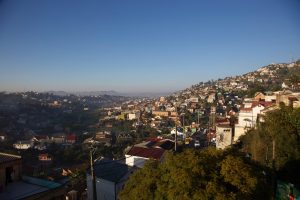 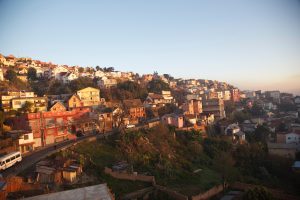 Up about 6:15, the roosters were making a huge amount of noise.  I am on the 4th floor (5th if you count how we do in the US).  No elevator.  Dragging my book bag and a 43 pound duffle up the stairs last night isn’t something that I want to repeat.  Took a few photos of the bedroom window in the early sunlight.  The haze is actually pollution.  Did breakfast with the team and back up to the room to get ready for the day.  We are spending tonight in the same hotel so I do not need to pack everything up.  Got the internet connected to the wifi, but it only works in the lobby.  Traded a handful of text messages with Antje and even got one from Josh.  His number changed again.  Off to our first destination, picking up solar panels and dropping them off at MBP (Madagascar Biodiversity Project).  Just watching the driving here is insane.  The roundabouts are packed with a gazillion cars, push carts, scooters, and bikes.  I don’t understand why I didn’t see major crashes all over the place.  From there it was off to lunch.  There was a kitten with an eye infection that gave it a very strange look.  It figured out we had food and kept asking for some.  I gave him a small piece of steak.  20 minutes later, I did the same thing to its mother.  After lunch, it was off to a big store, something like Wallmart.  The kids got to wander off, but I was working on getting the cell phone data plan to work with my iPad.  Picked up a SIM card at one store and took it to another store to be trimmed down.  Took it back to the first store and after a bit of confusion and got the data plan set up.  The SIM card cost 1,500 Ariary.  That is only about $0.68 for the card.  The one gig for one month cost 45,000 or $20.46 at the exchange rate we used (1$=2,200 Ariary).  To actually put the plan on the card, it needed to be placed into a cell phone and loaded that way.  Got it working and we headed back to the hotel.  Moving around this place always seems to take a very long time.  Got back to the room about 6pm and traded text messages with Antje.  Joined some of the team about 6:45 and everybody was there by 7:00.  I had spaghetti and meatballs for dinner followed by a bit of chocolate ice cream. Back at almost 9pm for another exchange of text messages and to work on my journal.
A bit more work and to bed about 10:30.