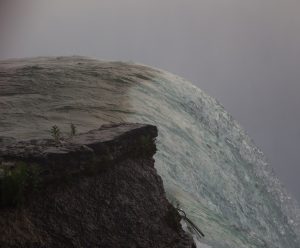 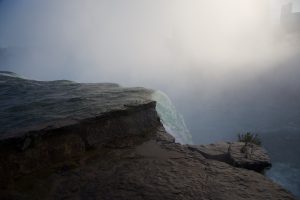 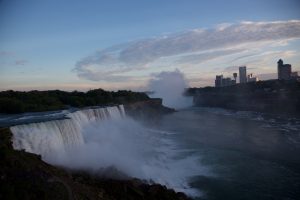 This was an eventful day! We checked out of our somewhat marginal hotel
without taking advantage of a VERY marginal-looking continental breakfast and took off to explore Cleveland instead. We found our way to the
Playhouse Square area, where there is quite a bit of gentrification and
remodeling going on, and after some Starbucks coffee/breakfast, walked
around there for a bit, before driving through downtown towards the
waterfront, along the lake, and then toward the Westside Market, where we
were meeting my old friend Paul and his partner Miguel (pronounced Michael) for some shopping and lunch. Westside Market is a 100-year old indoor food market, which offers traditional meat, veggies, and baked goods alongside international specialties, and caters to regular shoppers from the neighborhood as well as to tourists and hipsters. We saw some great baked goods, but we only bought a Russian tea biscuit (a good bit like a scone, but with more fruit) for later, and we had a great time people watching. There was a sort of balcony/gallery from which you could see the whole market hall from above–really neat!

Then we went to a little cafe/diner for some lunch; Paul, Miguel and I all
had a middle eastern pita roll, and Mark had a roast beef sandwich. Paul,
who was born and raised in Cleveland, had some great stories about going to Westside as a kid, and he also shed light on the uneven development we’d
seen, with some areas very run-down and clearly abandoned. Cleveland lost
2/3 of its population since its peak times, so it’s no wonder that some
areas were never built back up after the collapse of some of its key
industries. But the downtown is doing well, and the touristy area around
the Rock’n’Roll Hall of Fame showed lots of signs of life. That’s where we
headed after saying goodbye to Paul and Miguel, and we spent a couple of
hours at the “Rock Hall,” for short. It was an okay experience, but nothing
blew us out of the water. There were some interactive exhibits with lots of
audio and video, but the challenge of building a museum of VISUAL things
around and AUDIO experience did make for some shortcomings. We spent a bit of time in a temporary Paul Simon special exhibit with lots of interviews on video screens that was good, and we also liked a pretty experimental
11-minute multi-screen video about the rise and diversity (but unfortunately not the fall) of the music video since the beginnings of MTV. And a recreation of the stage of Pink Floyd’s Wall tour concert stage, with the creepy bug-like teacher lurking over us at the top of the wall brought back some memories of my second-oldest taste in pop. (I remember bring 14 and finally buying myself a copy of the vinyl double album after having
scratched up my boyfriend’s copy on our record player.) But the endless
array of that rock singer’s guitar and this other artist’s outfit for a
concert tour just got a bit old after a while. I guess I am past the age
where my heart goes aflutter when seeing John Lennon’s outfit from the cover of _Sergeant Pepper_ (the lime-green satin “uniform” designed by a costume designer for the cover).

After a couple of hours in the Hall of Fame, we got back into the car and
took off, for the 3 1/2 hour drive to Buffalo, NY. It was an uneventful
drive, this time actually with sunshine, but since it was all Interstate, we
only caught a couple of glimpses of Lake Erie. We got to our hotel at about
5:30, went to a nearby Ruby Tuesday’s for the salad bar for dinner, and then
decided to go to Niagara Falls yet that night rather than waiting until
morning, since we had good weather and still quite a bit of daylight left.
It was about a 40-minute drive to the falls, and we managed to find street
parking right outside the state park, and do all the free stuff (seeing the
falls, but not getting on any boats or climb down to the bottom of the
waterfall) in the two hours or so we spent there. The falls are impressive,
but the park is super manicured, and the surrounding area on both the
American and the Canadian side is very built up with both industrial stuff
and casinos and hotel. So it’s hard to overlook the hypercivilized
environment and just focus on the falls, especially if one knows that their
“majesty” is so very much controlled by people–humans divert a huge part of the water upstream for power, even more during the non-tourist season. But there were some beautiful sites from which we could see the American falls and Horseshoe falls, and there was also good people watching. It was very busy throughout the state park, and tourists from all over the world were speaking all kinds of languages, but surprisingly, the dominant tourist
group were multigenerational Indian families. It was surprising to see so
many saris and other traditional outfits, especially the grandmas, who
tended to be most traditionally dressed. We walked around and looked at the Falls from various angles until about sunset, and then drove back to our
Buffalo hotel. We have no idea how far we want to get tomorrow!