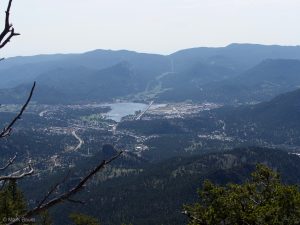 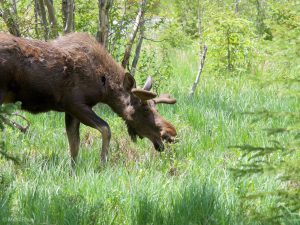 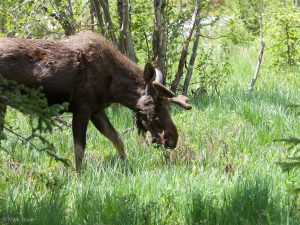 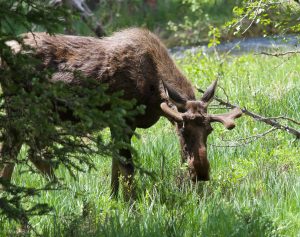 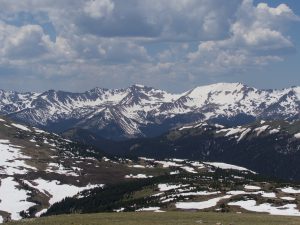 We woke up before 6 am again and were on the road early, with a couple of very minor hitches–including trying to get coffee at a Starbucks where “the computers were down.”  Well, McCafe is about the same, so that’s what we got on the way out of town.  We were back in Rocky Mountain National Park before 8 am and thanks to a friendly ranger’s advice at the entrance, we took a chance at a 6-mile hike right near the entrance of the park, up a mountain called Deer Mountain that overlooks the entire valley that Estes Park sits in (Horseshoe Park).  It was quite a climb at times, with switchbacks, and I was struggling more than I thought I would with the altitude on the way up.  But the view was worth it, as was knowing that I can still handle a 6-mile hike.  Mark did better but the pollen is getting to him. The way down was more pleasant for both of us!
After this hike (from 8 until about 11:30) we went to the nearest picnic area and had our picnic, and then continued our drive through the park.  We didn’t stop much for the first hour or so since we were again on Trail Ridge Road, but in the Western half of the park, we picked out several shorter hikes with little elevation change–at the Colorado River trailhead, where the path leads across some awesome snowmelt creeks and into a gorgeous meadow that the (fairly narrow, but fast) Colorado runs through.  But the awesome highlight was that thanks to a tip from another hiking couple, we got to see a moose munching away on the banks of the river!  I had never seen a moose in the wild, and it was breathtaking.  Mark took some great photos.
At the next stop, the Holzwarth Historic Site, also in a beautiful Colorado River meadow, we watched a whole bunch of elk resting and wandering around, clearly not at all perturbed by the many humans wandering around. They wandered within a few hundred feet of the hikers on the way to the site, and a couple even crossed our hiking path.  While we were there, all the visitors did the right thing and kept their distance, but it was riveting to have the elk so close.  The ranger said they probably didn’t have any newborn calves with them, or they would have been much less peaceful and mellow about us.  The historic site was quirky but interesting–this particular valley had quite a lot of dude ranches before it was added to the national park lands, and the oldest of them, run from the 1920s to the 1970s by a family that immigrated from Germany, was preserved and restored.  And interesting insight into early Rockies tourism–cabins surrounding the original homestead of this family, which was turned into the kitchen, where Mother Holzwarth, a stern-looking German woman, cooked three meals a day for the lodgers in a kitchen that was half-equipped with American and half with German kitchen gadgets (the ranger promised the stuff was authentic; I of course recognized several German things, like a sugar shaker and an old-fashioned cone-shaped metal measuring cup).
After this last more extensive stop, it started to cloud over and as we left the park on the southwestern entrance near Grand Lake, looked quite stormy.  We did add one more mini hike, though, because our trail brochure had mentioned a 0.3-mile hike to a waterfall above Grand Lake (Adams Fall).  Even as it started to drizzle on us a little, we persisted and were rewarded with a pretty dramatic sight of crashing water, as well as thunder in the mountains, which always echoes very impressively.  (We were not very high up and safe.). It only started to rain in earnest after we were back in the car and driving to Granby, where we are staying in a very odd hotel / condo combination, the Inn at Silver Creek, with hundreds of rooms, most of which are clearly only used during ski season, so everything is only sort of open–the only working ice machine is miles away, the restaurant only has its bar menu available, the wifi kind of works, etc.  But we had a perfectly decent, ordinary meal that wasn’t crazy expensive, and although our room doesn’t have a refrigerator, it has a balcony and is spacious and quiet. We’re tired but it couldn’t have been a more perfect national park day!