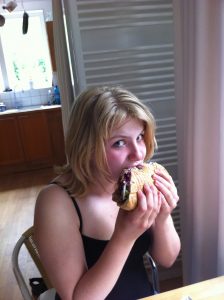 Berlin Day 1: a full success. It was sunny and quite warm (in the 70s for the first time since our first week in Germany), and after a short walk without the kids in the morning, we took off around 10:30 am for a day in Berlin. We started by getting our public transportation plus “Museumsinsel” tickets at the central station and then walked to the Reichstag and on to the Brandenburg gate. The Capitalist wall had temporarily replaced the old East German wall: the Gate itself was blocked off for walking through by the giant LED screens set up on the Fanmeile for the duration of the Eurocup, so I couldn’t demonstrate / replicate the amazing sensation of walking through the Gate itself that I experienced 2 1/2 years ago when I was here with Imke and Judith. We walked down the rather construction-heavy Unter den Linden to the Berliner Dom, and cut across to the museums. I expected long lines but our pre-paid tickets plus the free ones for the kids worked really well, and we neither had to wait in the Neues Museum nor in the Pergamon-Museum. The Neues Museum with the Egyptian collection, including the Nefertiti and some really stunning other Egyptian artefacts, and the small Schliemann collection with what’s left from the “Priamusschatz” was really interesting, including the combination of old structures that were still viable, and new pieces that are part of the most recent renovation (it opened back up in 2009, I think). Kai was certainly ecstatic about seeing the Egyptian exhibit, and Kati was also duly interested. We then had a bite to eat near the Pergamon-Museum and went in there; I have to say that the sheer scale of the exhibit pieces still makes it the “better” museum in my book, and I was able to wow the kids (and Mark) by showing them what I still remembered very clearly from the last visit: the mosaics I loved so much, the market gate from Miletus, the Ishtar gate, and also some of the exhibits from the Islamic art museum portion of the P. So everyone had a really good time with the museum visits, and I didn’t get any whining from either of them at all. Then we walked to the Hackesche Hoefe, and had ice cream and did a bit of window shopping before heading back to the Central station with its many shopping opportunities. Kai and I looked for the Manga drawing instruction book that he wanted to buy, and luckily one from the series was available in the Virgin book store, while Kati found some shirts and some gifties for Krynn. We came home with Doener take-out and ate, and then Mark and I took off for a little exploratory walk in the neighborhood. The Grunewald is only minutes from here, as is the next S-Bahn station, which actually has shopping and a couple of bars and take-out places. So we had a good time, and really enjoyed being by ourselves for an hour that way as well. We came home before the soccer game between Greece and Germany started, and thus forewent the opportunity to be part of the 500.000 people on the Fanmeile watching and celebrating Germany win. But we sure heard the victory party fireworks in the neighborhood… and this was just the quarterfinals!