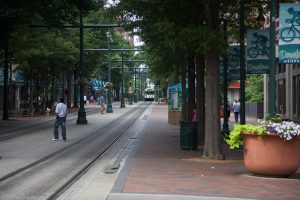 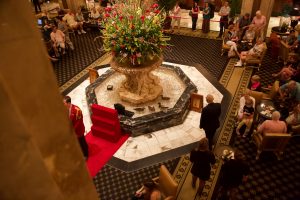 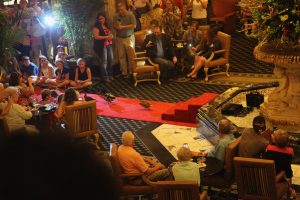 We left the hotel right after a 7:30 am breakfast, in the rain, and Mark drove us across Tennessee, past Knoxville and toward Memphis on the I-40 for many hours before it finally quit (really our first truly crappy driving day). We really couldn’t appreciate the landscape (visibility was lousy) but we were vaguely aware that it was hilly, lush and green. After we’d finally driven out of the rain and we were getting hungry for lunch, the I-40 conveniently went right through a state park (Natchez State Park), and we veered off to find the restaurant in the very middle of that park. I don’t think I’ve ever seen such a big state park with so few people in it! We were admittedly very early for lunch, right at 11, but the entire lodge seemed deserted, and for the first half hour we were the only customers who were having the rather large, if simple, buffet lunch that they had decked out. (It wasn’t the prices—7.95 for an all-you-can-eat lunch buffet, even a simple one, seemed as 1970s as the décor of the lodge.) We didn’t want to leave right away, though, and with a bit of effort found a little hiking trail after lunch, just a one-mile loop through very lush green forest, up and down a ravine, with adorable mushrooms! It was in the upper 70s, and we just enjoyed being out and about for a little bit. Part of the park is completely covered with kudzu, and our trail seemed like it was about to be overgrown in many spots, so that may be part of what is making the park a destination that’s not exactly popular, but we just couldn’t quite figure out why it was so deserted.

We then got back in the car, with about 100 more miles to go to Memphis, and tried to figure out on the fly what we wanted to do there, since neither one of us had the faintest idea except NOT going to Graceland (Elvis is not a favorite with either of us). Eventually we settled on the downtown area, and found the visitor center right off the interstate exit for downtown. That was handy because they told us to just park right there and take the trolley for a dollar and go see the sights that way. So we played tourists for an afternoon: we took the lovely ancient trolley that loops around to Beale St., where all the blues bars and bbq joints are. Since it was 3 pm, it was still pretty quiet, but there was some live music, and some kids called the “Beale St. Flippers” doing cartwheels for money. From there we went to the waterfront, and looked across the Mighty Mississippi and watched a riverboat full of tourists land. There was a lot of construction going on, since they are clearly improving and changing the riverboat dock/landing pier. We also checked out the downtown area, which looks a lot like a European pedestrian zone (it’s trolleys only), but features too few shops in proportion to banks and businesses, so it was pretty deserted. We dutifully walked to the Peabody hotel to watch the ducks walk out of the fountain back to wherever they go when they are not in the fountain, on a red carpet that gets set out for them every evening at 5 pm. I have never seen this many people watch with such fascination as four perfectly ordinary ducks walked out of a body of water and down a short flight of stairs! There must have been 200 tourists all over the Peabody Hotel’s sumptuous lobby just for those ducks and their “duckmaster” with his red jacket and his cane. Very silly!

We walked back to Beale Street, had a very ordinary bar meal (pulled pork and a burger with a standard green salad), and watched the tourists trickle in. If we were REALLY good tourists, we would have stayed until the evening hours to get the full night-life impact, but we were tired. So we headed back on the trolley, which went back to the visitor center in a great big loop that included more of the downtown but then also the rundown tail end of the area, complete with a weird ultra-modern pyramid-shaped building that is clearly currently deserted or being remodeled. We looked across the Mississippi one more time, and then took off to drive over the bridge to West Memphis, AR, where a hotel room costs about a third of one near downtown Memphis. We are in a newly renovated, very clean and spacious Days’ Inn, and very much done with the day!