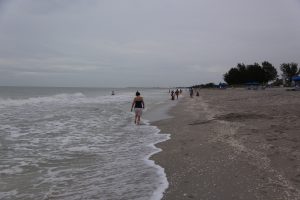 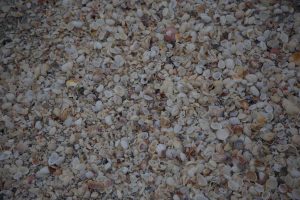 We got up and ready between 8 and 9 after a relatively restful night in the attic room that is usually Kati’s. Then Bruce came home from his radio show, we said goodbye and took off for the ocean. The immediate goal were Sanibel and Captiva Islands, and then Fort Myers Beach for overnight. So while we were driving the fairly unexciting Interstate stretch between Lakeland and where we had to branch off for Port Charlotte, I booked us a motel or the night (and then also one much more expensive one for two nights on Key West). We stopped near Port Charlotte for Subway, then made our way to Sanibel Island. We found public beach access parking about midway through the island, and although it had been drizzling off and on, it quite just for our pleasure, although it remained overcast—which meant that there weren’t hordes on the beach and it was nice and cool, for FL in the summer. We had a great time walking up and down the beach looking for shells, which is what Sanibell is famous for, after all. I also got in the water for a bit, but it was too shallow for swimming, even though the temperature was perfect. We didn’t go see the lighthouse or the animal / wildlife preserve (it was too late in the day), but we did drive on to Captiva Island and parked in the lot at the very end of the publicly accessible part of the island. We walked around some more and looked for more shells. The ocean makes me happy!

We drove back around 5 pm (having spent the afternoon on the islands) and then crossed another bridge to Fort Myers Beach. The motel I booked us was a bit off the beaten track, i.e. at the southern tip of the island FMB is on, but it was very cute and clean and run by a German who gave us a “rainy day upgrade” to a king size bed. We drove back to the busier end of town for some dinner, and found a good casual beach front restaurant/bar with a burger for Mark and a fish wrap for me. We bought ice cream at the 7-11 for dessert and took it to the beach. Fine dining could not have been better than this! We briefly checked out the beach access near the hotel just because a review had claimed it was “a mile away” (500 feet tops, with beautiful clear water ahead of this little sand bank that kept the sand clouds in the water at bay). Then we took showers and went to bed. What a great first day for us!